At SIIL, we explored the literature and interacted with scientists to develop a list of critical indicators, and then analyzed them for their precision and ease of measurement. We also carried out field visits with scientists and stakeholders (farmers and project partners) to obtain insights into engagement, data collection, indicator generation, and perceptions of participants.

Among others, visits and interactions with scientists and stakeholders included:

During this process, we also collected information on the data, methods, and protocols that scientists use to estimate indicators for their various projects. In some projects, we found data gaps, meaning that the projects are not collecting data from a sufficient number of indicators to evaluate sustainable intensification. We are proposing data collection methods to fill this gap. Where gaps were identified and new indicators proposed, we presented them to the teams and discussed their relevance and measurability. A similar approach has been used by earlier studies (Zurek et al., 2015; Taylor et al., 1993; Van der Werf and Zimmer, 1998) to refine indicators in situations where no other possibility of validation exists (i.e., a new indicator is proposed but with no data to estimate it).

The results support what a number of studies have indicated: that there are gaps in indicator selection and use across the domains. One takeaway is that scientists working in sustainable development should make special efforts to consider indicators across all domains in order to overcome potential disciplinary biases. Scientists were provided with a list of indicators and asked to determine on a Likert scale their level of agreement on the criticality of indicators to assessment of sustainable intensification. The results are presented below. On average, indicators in the social and human condition domain did not receive high of levels of criticality

Commonly measured indicators used by SI researchers who participated in an online survey.1

1 The number in parentheses indicates the percentage of the 44 respondents who measure that indicator.

Indicators of sustainable intensification, ranked by average level of agreement 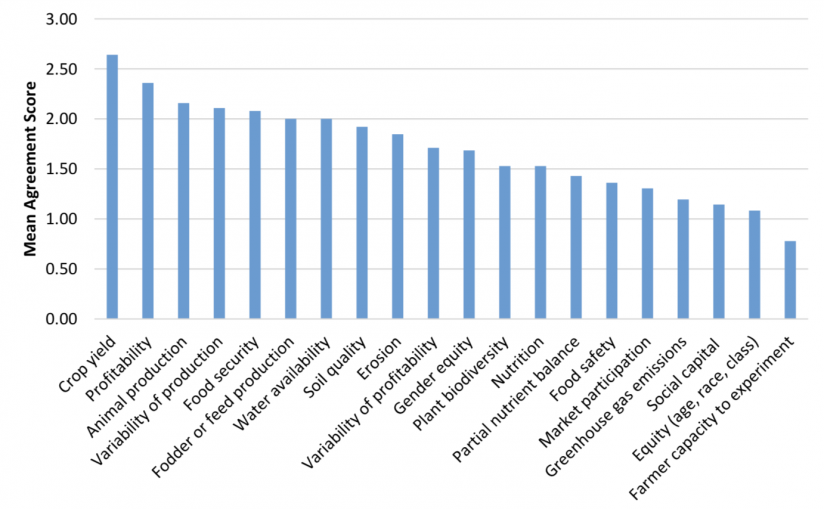