Home / How to Use the Framework

The SI indicator framework was used to guide research in a USAID‐supported Africa RISING project in central Malawi1 . In brief, a participatory action research approach was undertaken to evaluate sustainable intensification trajectories for key household types2.

Based on literature review and stakeholder engagement, research hypotheses were developed, related to the following overall questions:

Through an iterative action research process, including a mother‐baby trial design3 and systematic implementation of panel surveys, research questions were developed and refined. Further information of the current status and research directions can be found here.

Goals of the project included increasing legume cover and promoting diversity of legume functional type on maize‐based farms. We considered SI indicators in each of the five domains to assess sustainability and account for synergies and tradeoffs.

For productivity indicators, we relied on cropping system trial data and modeled Net Primary Productivity (NPP) and yield data associated with maize and grain legumes. Modelling also allowed us to expand the range of weather conditions under consideration and thus the inference zone.

For economic indicators, we considered profitability based on two scenarios and the previously mentioned productivity values.

The environmental domain indicators relied largely on experiment data and modeled values, based primarily on the extent and diversity of legume cover according to technology attributes (e.g., pigeonpea interventions had greater duration of carbon (C) and nitrogen (N) fixation, due to the nature of pigeonpea growth characteristics.)4

Indicators in the human condition and social domains were based on modeled food supply relative to the demand of typical households, and farmer participatory rating of technologies and experimentation underway with farmers.

SI indicators are presented for Golomoti (see below), a lakeshore location and relatively marginal site.

Comparison of maize and maize/legume technologies in Golomoti, Malawi, across all five domains utilizing data from Africa RISING trials, surveys, and crop models. 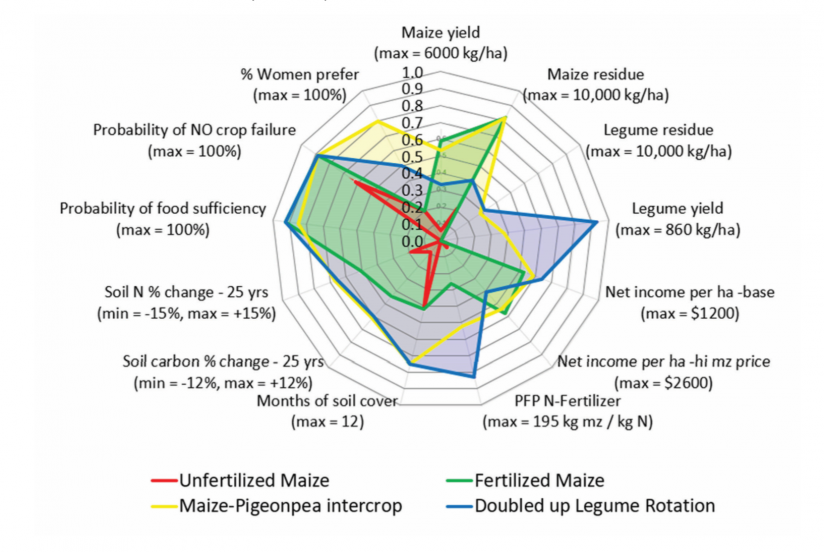 The indicator assessment across SI domains illustrates that when maize‐pigeonpea and doubled‐up legumes, two diversified technologies, are compared to continuous maize, they have many features associated with greater sustainability. Note the diversity of crops produced, including high nutrient-value pigeonpea and other grain legumes (human condition), and the extended ground cover and nitrogen fixation (environment) associated with these technologies. These are associated with higher soil N and C accrual than either sole maize system (environment). This is suggestive of greater natural resource base amelioration associated with legume diversification, as hypothesized.

However, a challenge emerged in that the annualized maize production was only high for fertilized maize. Lack of fertilizer and high legume integration systems were both associated with modest annualized maize yields, which makes it difficult to achieve food security in this environment. The doubled‐up legume system with judicious fertilizer had high maize yields in that phase of the rotation but required sufficient land size.

So, for farmers with sufficient land size, this may be a feasible option and a profitable one that also includes other aspects of sustainability, as seen above. One assumption highlighted was that legume residues can be utilized in a sustainable manner, but this concept requires more detailed follow‐up studies.

How to Use the Framework