Wealth is a categorization used in most studies and societies to assess the relative socioeconomic status of an individual or household in a given setting, context and/or community. Wealth ranking is a participatory exercise where key informants rank households in the community according to their evaluation of each household’s resources. The ranking provided from this exercise is like a weighted average of the household’s resources and it is important to note that higher weights are implicitly given to resources considered socially more important by the key informant (Kebede, 2009). For this reason, data from wealth ranking may not align with a ranking of households based on a survey of assets. Wealth ranking can thus provide important insights into the social values of community members.

Wealth rankings are often carried out actually as wealth categorizations using pre-defined wealth categories, such as wealth terciles (3 categories) that might be defined as “poor”, “intermediate”, and “rich”. The specific criteria for falling into each category can be developed and made explicit by the key informants. Wealth is a relative category, therefore, research scientists should be aware that members in the communities possess knowledge of the wealth positions of community members.

Analyzing how wealth interacts with technologies is important because the adoption and adaptation of an intervention may differ by the endowment in resources or productive assets. Knowledge of participant’s wealth categories may provide information to the scientist to guide recommendations of how the intervention may match the differing resources in the community.

Using this wealth ranking approach may be an important alternative and complement to other methods, such as conventional surveys that estimate poverty rates and asset-based wealth indices, and may be cheaper to administer.

How to operationalize the metric

Method of data collection and data needed to compute the method:

Wealth ranking could be carried out with a key informant using a card-sorting technique to categorize households by wealth. A first step in collecting these data is to identify the study area (e.g., village or ward). Community selection is an important part of the process and researchers should aim to carry out the exercise in communities that represent the diversity of conditions (agro-ecological as well as socioeconomic) in their focus area. Because the exercise requires a key informant to be familiar with all of the households, an upper limit of 100 households is suggested (Grandin, 1988).

A list of households in the village should be compiled taking into consideration how the “household” is defined. The most important unit to rank (e.g., nuclear household, extended household) will depend on how access to resources is organized (Schoonmaker Freudenberger,2008). For example, in many parts of Mali the nuclear family is not typically considered a household because land is allocated and labor coordinated by the extended family. The definition of “household” should be discussed with the informants who will assist with the ranking. The names for each household should be written on a small card and a unique household number should be given to each card.

Grandin (1988) states that “obtaining a complete list of household heads is the most difficult aspect of wealth ranking” (p.13). A few residents of the community should be asked to “mentally ‘walk’ through the area giving names of households living in each place” (p.14). Special effort may be needed in transient communities (such as pastoralists). Even in sedentary communities it is recommended to inquire about other households living in the community but who do not consider it their “home” (Grandin, 1988).

The informants should be long-standing community members familiar with the individuals in the area and known for being honest. It is recommended male and female informants be selected representing a cross section of the community. Grandin (1988) does not recommend using community leaders or extension agents, but rather “ordinary farmers”.

Interviewing  informants may be done as a group or individually. Grandin (1998) recommends at least three independent rankings be completed (i.e., three individuals or three separate groups) to reduce bias. Names of each household should be written on a card and several key informants (at least three) should place the cards in piles according to the wealth of each household (Grandin, 1988). The cards should be shuffled between each interview. Bellon (2001) proposes using several informants to work in a group aiming at consensus in how they categorize the households. This simplifies the analysis because it reduces the likelihood of divergent responses for any given household. However, such a group process could easily be biased by an influential or charismatic informant. Grandin points out that it generally takes longer for groups to complete the ranking because of the time it takes to discuss categorizing each household.

There are two major components of the interview – the actual sorting of cards and a discussion about the characteristics of the households in each category. Practitioners vary in which component is carried out first. Grandin (1988) recommends allowing the informant to decide on the number of piles, even splitting or combining piles as they sort the cards, and then at the end discussing the characteristics of each group. Other authors recommend asking the key informants to decide on the categories and characteristics of each category before sorting (Bellon 2001; Heemskerk et al., 2003).

Sorting first allows for more of a natural grouping that emerges from the specific households. The subsequent discussion is based on the informants’ specific thinking as they categorize the people they know. Establishing categories first, in contrast, draws on the informants’ theoretical framework of wealth categories, which may be difficult if it is something they have not explicitly considered before.

During the sorting, Grandin (1988) recommends that if an informant seems hesitant about a household it is better to have them leave it as “unknown” rather than forcing them to categorize it, perhaps inappropriately. She also recommends reviewing each pile once all the households are sorted to double check the grouping and allow the respondent to adjust the final placement of any household.

Informants typically use four or five piles, though some may form as many as nine groups. If an informant puts most households into one pile, encourage them to divide it into two or more groups. Grandin (1988) recommends no pile having more than 40% of the households. Bellon (2001) suggests using three simple categories – poor, intermediate, and wealthy.

When the number of piles is not predefined then after the ranking is completed there is the opportunity to inquire about the informants’ criteria for grouping the households into those piles. Researchers should ask the informant what makes households in one group different from households in the other groups. Grandin (1988) recommends starting with the richest group and asking how they are similar and what they have that makes them rich. After having the informant describe the characteristics of each wealth category, the researcher has an opportunity to inquire about their specific research interests – for example, what challenges each group faces in their crop or livestock production (Grandin, 1988).

When establishing categories before ranking the cards, the interviewer should ask the informants to define what is meant by “wealth” in their setting or village. Heemskerk et al. (2003) recommend asking respondents for indicators of wealth or standard of living and then discussing the systematic causes of variability among households. After this is ascertained, the interviewer should discuss with the informant the characteristic of a “rich” household and then those of a “poor” household. The interviewer should then note the characteristics of each group (i.e., the “rich” and “poor” households) on a legible chart, and discuss it with the informants to see if they are in agreement. The key informants should discuss and describe the various categories in order to achieve consensus about the number of categories and their designation (e.g., ‘low-resource’ and ‘high-resource’ households).

The information from the card sorting and the related discussion should be recorded. A sample recording sheet adapted from Grandin (1988) is in Box 4. For each group, the household numbers should be listed as well as notes about the characteristics of that group.

Wealth ranking, although indicated as an “alternative” method, may be complementary to data collected via other sources, like household surveys. Kebede (2009) carried out both methods with the same households in four East African countries and found wealth ranking to be important for understanding the social values of resources. Scoones (1995) carried out both methods in Zimbabwe and found the ranking to be correlated with livestock ownership and crop production and an accurate estimator of relative wealth. Furthermore, Scoones notes that the qualitative information obtained during the ranking “reveal[s] details of the historically, socially and economically constructed understandings of wealth and well-being of different actors” (p.67). 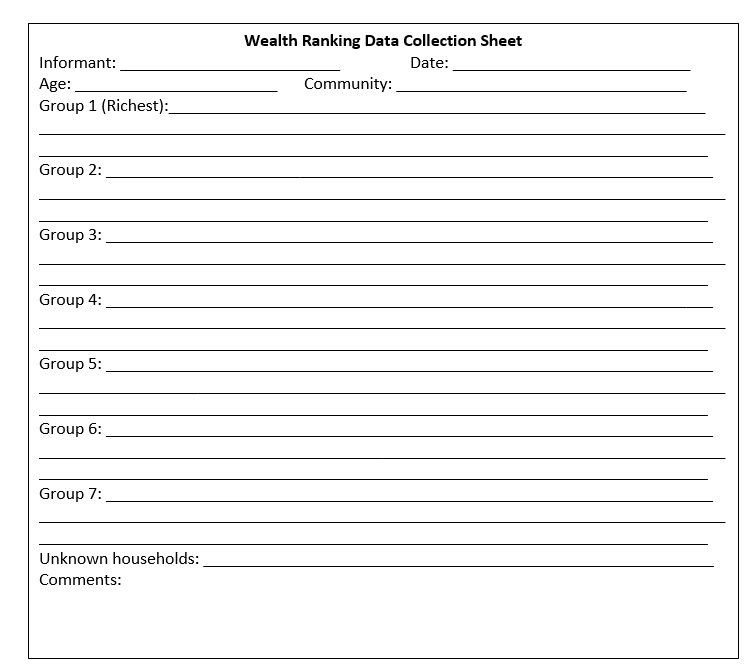 Grandin (1988) recommends the following scoring method to develop average scores for each household:

Limitations regarding estimating and interpreting:

The primary limitation of the wealth ranking is that it provides a relative assessment of wealth. One complication from this is that it is difficult to see how a household has changed over time because their relative position in the community could change even if their physical assets do not (for example if the wealthiest community members moved away during that time). It also makes comparison of wealth rankings to those of other communities difficult since the categorization of a “rich” household in one community may differ from that in a different location (Barahona and Levy 2007).  However, it has been found that the characteristics that informants use to classify household in a village may provide a rough idea for comparison with households across villages (Bellon, 2001).